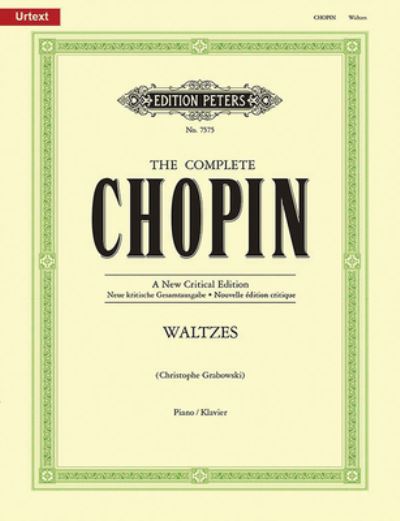 A new Urtext critical edition of Chopin's numerous Waltzes, edited by Christophe Grabowski. There is evidence to suggest that waltzes featured among Chopin's very first and last compositions alike. This volume includes the eight Waltzes published during Chopin's lifetime followed by those released after 1849. An Appendix includes variant versions based on other major sources. The Complete Chopin, 'A New Critical Edition' from Edition Peters is a landmark in the publication of this composer's music. Three of the world's most respected Chopin specialists have been appointed as Series Editors: John Rink, Jim Samson and Jean-Jacques Eigeldinger. With further expertise provided by Christophe Grabowski, the Editorial Consultant, their unrivalled collective knowledge imbues this project with unique authority, drawing upon the latest international scholarship to ensure the stylistic integrity and consistency of the edition. Key Features include: An introductory essay in English, German and French examining the historical background, compositional features and performance practice issuesThe identification of, and adherence to, a single principal sourceA detailed and comprehensive critical commentaryChopin's authentic fingerings onlyEmphasis placed on retaining expressive features of the original notationNotes on the editorial principles and methodology guiding the whole project.