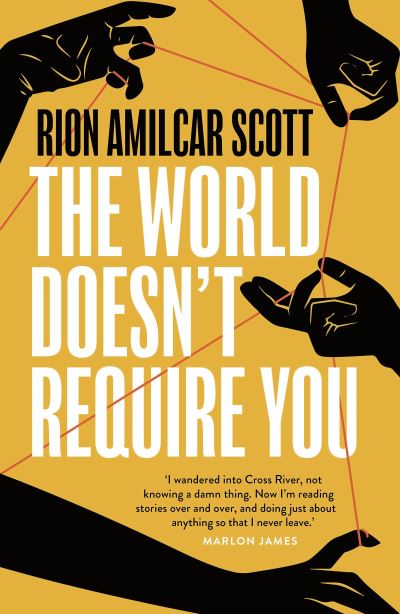 The World Doesn't Require You

Welcome to Cross River, Maryland. Established by the leaders of the country's only successful slave revolt, history casts a long shadow over its residents. Among them are David Sherman, a struggling musician who just happens to be the last son of God; Jim, a Robot Personal Helper desperate to escape the master who enslaves him; and James-my-man, who travels the path of the Underground Railroad year after year. Not to forget the water women who lure men to their watery graves and the screecher birds who cry out for sacrificial flesh... PRAISE FOR THE WORLD DOESN'T REQUIRE YOU : 'I wandered into Cross River, not knowing a damn thing. Now I'm shuddering, gasping in wonder, reading stories over and over, and doing just about anything so that I never leave' MARLON JAMES 'A musical and visceral explosion. The book makes you laugh even as it stabs. The truth told in a completely new way' NANA KWAME ADJEI-BRENYAH 'Flat-out unputdownable' LAURA VAN DEN BERG 'Rion Amilcar Scott doesn't hold back or tiptoe around issues about race. He's the most courageous writer I know; and this collection is an excellent example and significant achievement. He's now made his mark as a force to reckon with' NICOLE DENNIS-BENN 'Surreal, intertextual, and darkly comical... With breathtaking cruelty and devastating humor, Scott adduces the whole world in one community' NAFISSA THOMPSON-SPIRES