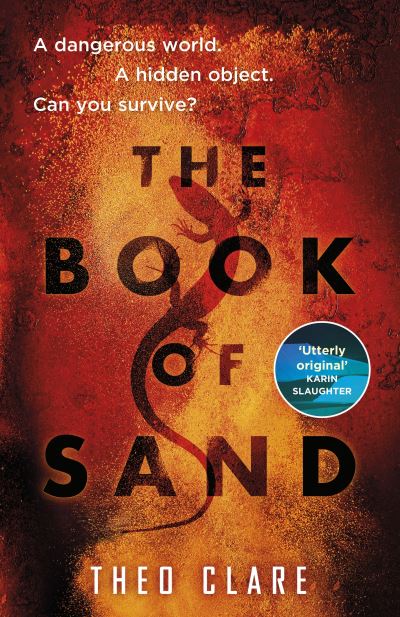 The Book of Sand

The Book of Sand: the first novel in an epic series created by one of the most gifted and invented storytellers of the twenty-first century. 'Shocking and satisfying ...a compelling, absorbingly different quest fantasy' Guardian 'An utterly original novel from an extraordinarily creative mind' Karin Slaughter 'Unique and fearless' Mark Billingham 'I inhaled it! It's beautifully written and utterly compelling' Harriet Tyce 'Fearless and compelling, lyrical and devastating by turns, the story never slackens pace.' Jane Corry ______________ SAND. A hostile world of burning sun. Outlines of several once-busy cities shimmer on the horizon. Now empty of inhabitants, their buildings lie in ruins. In the distance a group of people - a family - walk towards us. Ahead lies shelter: a 'shuck' the family call home and which they know they must reach before the light fails, as to be out after dark is to invite danger and almost certain death. To survive in this alien world of shifting sand, they must find an object hidden in or near water. But other families want it too. And they are willing to fight to the death to make it theirs. It is beginning to rain in Fairfax County, Virginia when McKenzie Strathie wakes up. An ordinary teenage girl living an ordinary life - except that the previous night she found a sand-lizard in her bed, and now she's beginning to question everything around her, especially who she really is ... Two very different worlds featuring a group of extraordinary characters driven to the very limit of their endurance in a place where only the strongest will survive. ______________ More praise for The Book of Sand ... 'Audacious, extraordinary and absolutely awesome' Alex North 'A future classic that exists between darkness and light. I was completely entranced by it' Christopher Fowler 'A huge and brilliant and engaging read. It feels like a place I have been to rather than words on a page' Alice Jolly 'A remarkable achievement' Shots Magazine ' What we have here is a fantasy about faith and the search for spiritual certainty... [an] ambitious religious parable.' FT ______________ Readers love The Book of Sand ... 'This was the best reading experience of a lifetime. I fear the words haven't yet been invented to describe how good the book is. It deserves to be a huge bestseller.' 'I would absolutely die for a movie adaptation of this one in the future!' 'The Book of Sand is dazzling, lyrical, surreal and a beautiful legacy.' 'An absolute must read!' 'I did not want to put it down at any point.' 'A gripping read.' 'Couldn't put it down. 5*.' 'This was a page turner that was totally original in concept.'