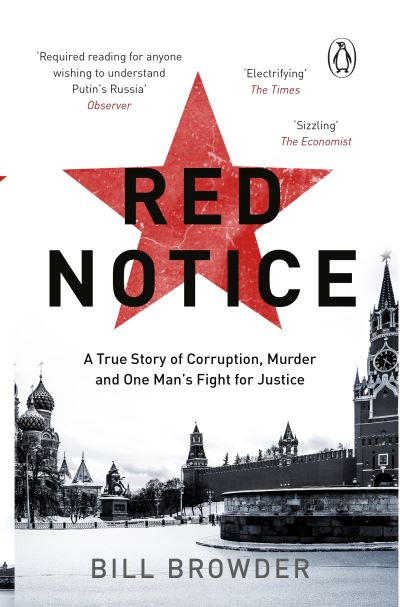 'An unburdening, a witness statement and a thriller all at the same time ... electrifying.' The Times I have to assume that there is a very real chance that Putin or members of his regime will have me killed some day. If I'm killed, you will know who did it. When my enemies read this book, they will know that you know. A Sunday Times and New York Times bestseller. A true-life thriller by one of Putin's Most Wanted. In November 2009, the young lawyer Sergei Magnitsky was beaten to death by eight police officers in a freezing cell in a Moscow prison. His crime? Testifying against Russian officials who were involved in a conspiracy to steal $230 million of taxes. Red Notice is a searing exposé of the whitewash of this imprisonment and murder. The killing hasn't been investigated. It hasn't been punished. Bill Browder is still campaigning for justice for his late lawyer and friend. This is his explosive journey from the heady world of finance in New York and London in the 1990s, through battles with ruthless oligarchs in turbulent post-Soviet Union Moscow, to the shadowy heart of the Kremlin. With fraud, bribery, corruption and torture exposed at every turn, Red Notice is a shocking political roller-coaster. __________________ Reads like a classic thriller, with an everyman hero alone and in danger in a hostile foreign city ... but it's all true, and it's a story that needs to be told.' Lee Child 'A shocking true-life thriller.' Tom Stoppard 'A riveting account... it is a powerful story and Browder tells it skilfully.' The Washington Post