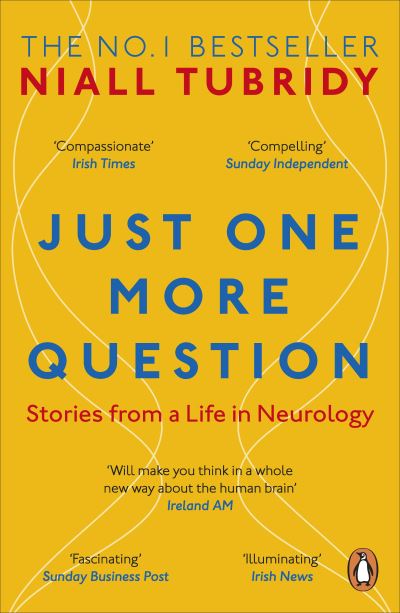 The No 1 Bestseller 'Compelling ... colourful, thoughtful' Sunday Independent 'Tubridy's compassionate, no-nonsense approach makes him a comforting guide through the landscape of neurological medicine' Irish Times __________ As a medical student Niall Tubridy fell in love with neurology. Figuring out how the brain and nervous system signal problems was a form of high stakes detective work and answers could be life-changing. Just One More Question is the story of Niall Tubridy's career in neurology. He shares the stories of encounters that are, by turn, poignant, dramatic and funny, such as... - The chef who goes for his usual morning walk, and loses his memory for the next six hours - The painter who believes her left hand is her guardian angel - The eager young lover whose head 'explodes' every time he orgasms Using simple and illuminating language Tubridy also explains well-known conditions like multiple sclerosis, motor neuron disease and Parkinson's and and brings us into the examining room as he accompanies patients with these diagnoses on their challenging path. In addition, he reflects candidly on the reasons he, a doctor's son, went into medicine, how he has been tested, and what he has learned about people - and about himself - along the way. Revealing, gripping and moving, Just One More Question will make you think in a new way about the human brain - and about what it's like to be a doctor. __________ 'Fascinating ... teems with interesting characters' Sunday Business Post '[Oliver] Sacks hoped that his neurological tales ... could bring us closer to where the psychic and the physical meet ... Tubridy's concerns are less rarefied. He wants us to understand the human toll that illness takes' Sunday Times 'It's a most readable book. There's no jargon in it' Seán O'Rourke, RTÉ '[My brother] has written a book which has to be one of the most extraordinary books written in Irish medical history! I would say that, wouldn't I? But it is great. It's really good, really accessible, a super read. We're all very proud of him' Ryan Tubridy, RTÉ 'Fascinating' Liz Nugent 'Very interesting and very entertaining' Pat Kenny 'Niall's sense of wonder at the human brain is enormously clear even with almost three decades of work in the field under his belt' RTÉ Lifestyle 'Will make you think in a whole new way about the human brain' Ireland AM 'A book that will fascinate you with the patients' tales but leave you at the end pondering the notion of what life really is' Journal.ie 'Simple and illuminating' Irish News 'Written in a very accessible way for non-medical people, like myself' Dave Fanning, RTÉ