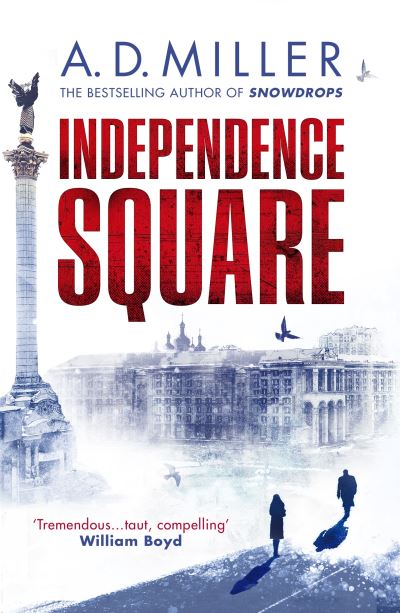 'Tremendous...taut, compelling' WILLIAM BOYD An exceptional political thriller set in Ukraine from the bestselling author of Booker-shortlisted Snowdrops . __________________________________ Twelve years ago, Simon Davey prevented a tragedy, and ruined his own life. Once a senior British diplomat in Kyiv, he lost everything in a lurid scandal. Back in London, he is travelling on the Tube when he sees her... Olesya is the woman Simon holds responsible for his downfall. They first met on an icy night during the protests in Independence Square. When Simon decides to follow Olesya, he finds himself plunged back into the dramatic days which changed his life forever. Set in an arena of political interference, corruption and espionage, Independence Square is a story of the ordinary people caught in the crossfires. It is a story of power, and where it really lies in the twenty-first century. __________________________________ Praise for A. D. Miller: 'Reminiscent of Robert Harris at his best' Financial Times 'A mesmerising thriller... Spellbinding' D. B. John, author of Star of the North 'Miller's gripping novel about truth, lies and power is a searing indictment of our times' Spectator 'An intriguing, evocative tale of betrayal, revolution and heartbreak' Jonathan Freedland 'Utterly gripping, a novel with its finger on the pulse of geopolitics that still manages to move deeply' Observer