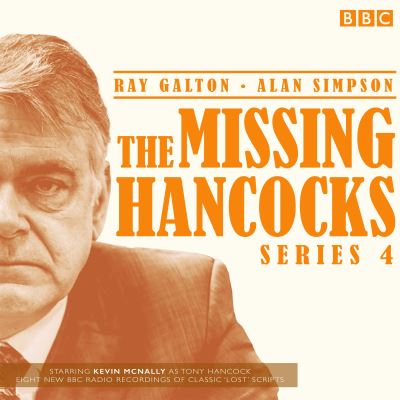 Eight brand new recordings of original Hancock's Half Hour scripts Hancock's Half Hour was one of the most popular radio comedies of the 1950s, and the first modern sitcom. Over 100 episodes of the show were broadcast between 1954 and 1959, but 22 went missing from the BBC archives. Lovingly recreated by Radio 4 in front of a live audience at the BBC Radio Theatre, they can now be heard for the first time since their initial transmission. Collected here are the final eight episodes from the fourth series - including a special premiere of The Counterfeiter, which was never recorded by the original team. The episodes are: The Winter Holiday, Department Store Santa, The Diamond Ring, Prime Minister Hancock, Christmas at Aldershot, The Counterfeiter, The Christmas Eve Party and The New Year Resolutions . Written by Ray Galton and Alan Simpson Produced by Neil Pearson, Paul Sheehan and Hayley Sterling Music composed by Wally Stott, and performed by the BBC Concert Orchestra conducted by Levon Parikian Thanks to Tessa Le Bars First broadcast on BBC Radio 4, 6 December 2018-31 December 2020 Written by Ray Galton and Alan Simpson, and with the classic score re-recorded by the BBC Concert Orchestra, these hilarious episodes star Kevin McNally as The Lad Himself, with Kevin Eldon, Simon Greenall, Robin Sebastian, Susy Kane and Margaret Cabourn-Smith.