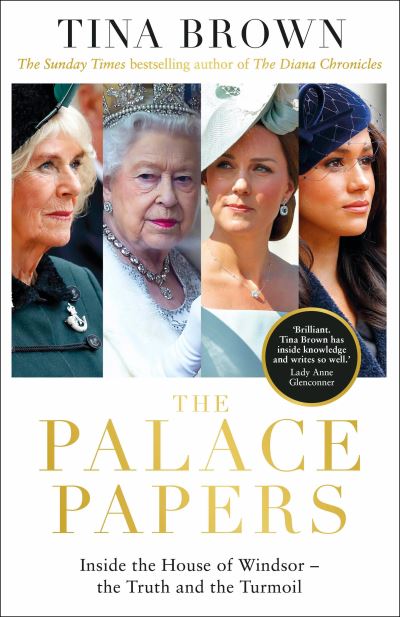 The Amazon No.1 Bestseller THE ROYAL BOOK OF THE YEAR _________________________________ 'Eye-poppingly revealing. . . impeccable sources, historical heft and canny insights served up with a zingy wit. There are many royal biographers, but few as good as this. She turns gossip into the first draft of history.' TELEGRAPH From the Queen's stoic resolve to the crisis of Meghan and Harry. From the ascendance of Camilla and Kate to the downfall of Andrew. Full of remarkable inside access, The Palace Papers by Sunday Times bestselling author Tina Brown will change how you understand the Royal Family. 'Clever, well-informed and disgustingly entertaining' THE TIMES 'A witty, rip-roaring read . . . full off perceptive and witty observations' i Newspaper 'A rollicking ride through recent royal family history . . . Tina Brown's sparkling prose and eye for detail enliven an entertaining exposé' OBSERVER 'A motherlode of delectable gossip . . . Brown has produced a work both scholarly and scandalous that makes us think about what the post-Elizabethan world may bring, alternately amusing and horrifying us along the way . . . vivid and richly-embroidered' INDEPENDENT 'The devil is in the delicious detail . . . Brown tackles her subjects with the same brio she brought to her years as a highly regarded magazine editor . . . Her access to those who flit around the royals gives her writing an edgy authenticity' DAILY MAIL 'Brown thrashes her way through absolutely everything that has happened to the family since the end of the last book in 1997 . . . Charles and Camilla are vividly brought to life in a series of well-researched stories and anecdotes' SUNDAY TIMES 'The Palace Papers is a sharp-nibbed observation of a generation of tumult for the House of Windsor, bookended by the deaths of Princess Diana and Prince Philip. It's a story about media as much as monarchy, and it draws from almost every chapter in Brown's career in journalism' FINANCIAL TIMES 'It's hard to look away as Tina Brown delves into decades' worth of royal scandals' GUARDIAN 'A brilliant book. Tina Brown has inside knowledge and writes so well' LADY ANNE GLENCONNER (author of Lady in Waiting ) _________________________________ 'Never again', became Queen Elizabeth II's mantra shortly after Diana's death. More specifically, there could never be 'another Diana' - a member of the family whose global popularity upstaged, outshone, and posed an existential threat to the British monarchy. Picking up where The Diana Chronicles left off, The Palace Papers reveals how the royal family reinvented itself after the traumatic years when Diana's blazing celebrity ripped through the House of Windsor like a comet. Tina Brown takes readers on a tour de force journey that shows the Queen's stoic resolve as she coped with the passing of Princess Margaret, the Queen Mother and her partner for seven decades, Prince Philip, and triumphed in her Jubilee years even as the family dramas raged around her. She explores Prince Charles's determination to make Camilla his queen, the tension between William and Harry who are on 'different paths', the ascendance Kate Middleton, the disturbing allegations surrounding Prince Andrew and Jeffrey Epstein, and Harry and Meghan's stunning decision to 'step back' as senior royals. Despite the fragile monarchy's best efforts, 'never again' seems fast approaching.