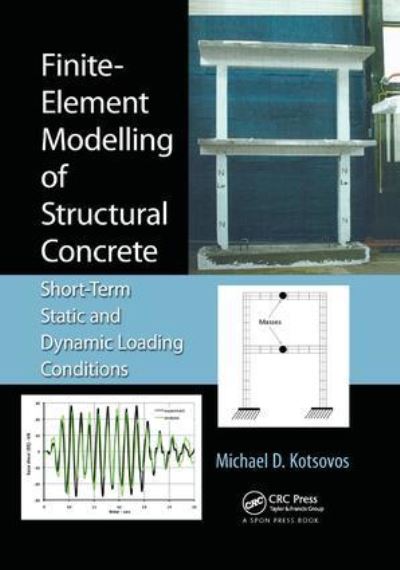 A Powerful Tool for the Analysis and Design of Complex Structural Elements Finite-Element Modelling of Structural Concrete: Short-Term Static and Dynamic Loading Conditions presents a finite-element model of structural concrete under short-term loading, covering the whole range of short-term loading conditions, from static (monotonic and cyclic) to dynamic (seismic and impact) cases. Experimental data on the behavior of concrete at both the material and structural levels reveal the unavoidable development of triaxial stress conditions prior to failure which dictate the collapse and ductility of structural concrete members. Moreover, and in contrast with generally accepted tenets, it can be shown that the post-peak behavior of concrete as a material is realistically described by a complete and immediate loss of load-carrying capacity. Hence rational analysis and design of concrete components in accordance with the currently prevailing limit-state philosophy requires the use of triaxial material data consistent with the notion of a fully brittle material, and this approach is implemented in the book by outlining a finite-element method for the prediction of the strength, deformation, and cracking patterns of arbitrary structural concrete forms. Presents a Unified Approach to Structural Modeling Numerous examples are given that show both the unifying generality of this proposed approach and the reliability of the ensuing numerical procedure for which the sole input is the specified uniaxial cylinder compressive strength of concrete and the yield stress of the steel. This not only offers a better understanding of the phenomenology of structural concrete behavior but also illustrates, by means of suitable examples, the type of revision required for improving design methods in terms of both safety and economy. This book: Highlights the significance of valid experimental information on the behavior of concrete under triaxial stress conditions for interpreting structural behavior Describes the techniques used for obtaining valid test data and modeling concrete behavior Discusses the modeling of steel properties as well as the interaction between concrete and steel Presents numerical techniques for incorporating the material models into nonlinear finite-element analysis for the case of short-term static loading Provides numerical techniques adopted for extending the use of the numerical analysis scheme for the solution of dynamic problems Predicts the response of a wide range of structural-concrete configurations to seismic and impact excitations Using relevant case studies throughout, Finite-Element Modelling of Structural Concrete: Short-Term Static and Dynamic Loading Conditions focuses on the realistic modeling of structural concrete on the basis of existing and reliable material data and aids in the research and study of structural concrete and concrete materials.