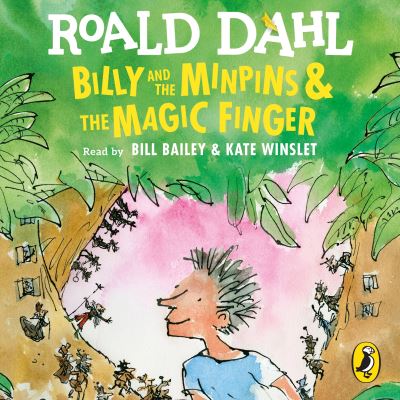 Billy and the Minpins

Penguin presents a phizz-wizzing treat for the ears with 2 favourite Roald Dahl stories: Billy and the Minpins by Roald Dahl, read by Bill Bailey Billy's mum says he must never go out through the garden gate and explore the dark forest beyond. So, one day, that's exactly what he does! There he meets the Minpins, tiny tree-dwelling people whose children are the size of matchsticks. They live in fear of the terrible, galloping GRUNCHER. Will it gobble Billy too - or can he find a way to defeat the hungry beast? The Magic Finger by Roald Dahl, read by Kate Winslet Every Saturday morning the Greg family goes off to shoot animals and birds. But the girl who lives next door hates hunting. Now it's made her so angry she's PUT THE MAGIC FINGER ON THEM ALL. And very strange things have begun to happen . . . Listen to Billy and the Minpins AND The Magic Finger and other Roald Dahl audiobooks read by some very famous voices, including Kate Winslet, David Walliams and Stephen Fry - plus there are added squelchy soundeffects from Pinewood Studios!